How to connect an iPad to a Raspberry Pi – Video Tutorial

There are a lot of good touch-MIDI controllers available for the iPad.  They’re fun to use and can be customized.  One such popular controller is MidiPads .  In the past, an owner of a Raspberry Pi wouldn’t be able to take advantage of this controller, since MidiPads speaks “Network MIDI” and the Raspberry Pi does not.  (Or did not, at least until now).

Using rtpmidi from the Command Line

Did you know you can use rptmidi directly from the command line in a terminal?  When used this way, the GUI (graphical user interface) is not used, and Bonjour is skipped as well.  Instead, each invocation of the rtpmidi program creates a new Session that can be a Session Listener or Session Initiator.  Working at this level you can connect if you know the hostname or IP-Address of each computer, as well as the port the RTP-MIDI session is listening on. 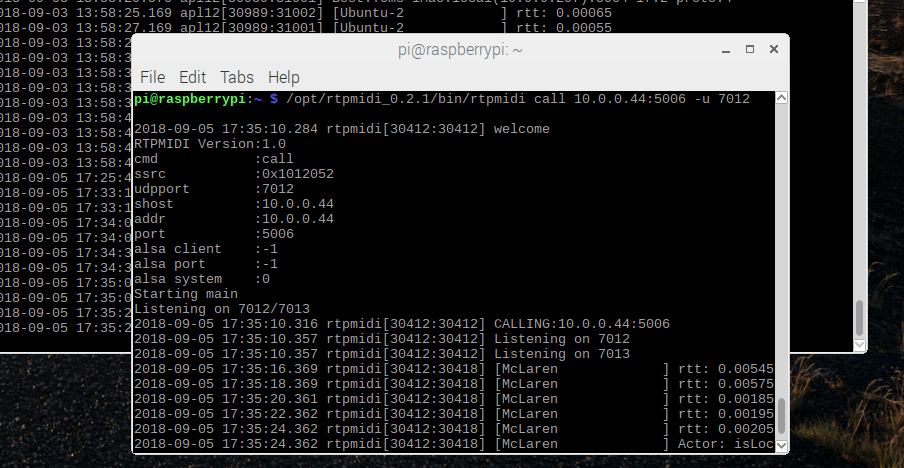 Command line mode can also come in handy if you are developing a “headless” embedded computer application like the Zynthian Raspberry Pi Synthesizer.
Read on for detailed examples and explanations.
Read More »Using rtpmidi from the Command Line

Towards the Tactile Internet of Musical Things

The enabling technology is 5G. The 5G standard defines a new class of service called “Ultra-Reliable Low Latency Communication” (URLLC). URLLC not only increases uplink speed, but also eliminates some of the handshakes necessary for an endpoint to send some data up to the network [2]. The end result is that applications can inject data into the network at a much reduced latency.
Read More »Towards the Tactile Internet of Musical Things

Remote musical MIDI collaboration has been an interesting academic research area for years, but has not been explored by many casual musicians. One reason is that the complexity of software that brings MIDI and Networking together makes it a little bit of a daunting endeavor. We think it’s time to open exploration to more people and make remote MIDI collaboration as easy as joining a Hangout.

What is Network MIDI?

Back in 2001, a group of researchers at Berkeley began to experiment with remote musical collaboration [1]. The idea was see if musicians separated by some distance could collaborate in real time over a high-speed network. Rather than sending real-time audio signals, MIDI events were transmitted between instruments at two different locations.

Network MIDI was invented sometime around 2004 to send MIDI messages over an IP network. To handle network loss, a protocol known as RTP-MIDI was created and documented as RFC-4695. Network MIDI is built into OSX computers and iOS devices. Apple music creators think nothing of connecting MIDI equipment using Ethernet and WiFi, instead of MIDI cables.

Sometime around 2009, Network MIDI was built into iPads and iPhones. This made building touch-based control surface Apps easy, and ensured they integrated with MIDI Workstations over WiFi. While this capability created many cool demos, the unpredictable latency and jitter of WiFi made MIDI-over-WiFi not attractive where timing is important. MIDI-over-Bluetooth became a standard in the last few years, and seems to be the preferred method for sending MIDI over wireless links.

McLaren Labs rtpmidi has always supported the following message types with full Journal capability for sending and receiving. (Note: The Journal is part of the error correction mechanism that recovers lost messages that occur when sent over a network.)

With this release, we also add the following to provide a complete set of MIDI message types including System Exclusive.