The Yamaha MD-BT01 is a nifty little MIDI 5-pin DIN to Bluetooth adapter.  It plugs into the MIDI In/Out ports of MIDI controllers to connect wirelessly to a computer with Bluetooth.  A typical use for this adapter is to connect legacy MIDI keyboards to a computer without using a 5-pin MIDI to USB adapter on the computer.  Since most computers have Bluetooth built in these days, this makes for a tidy work-area since it eliminates at least one of the cables in your MIDI studio. 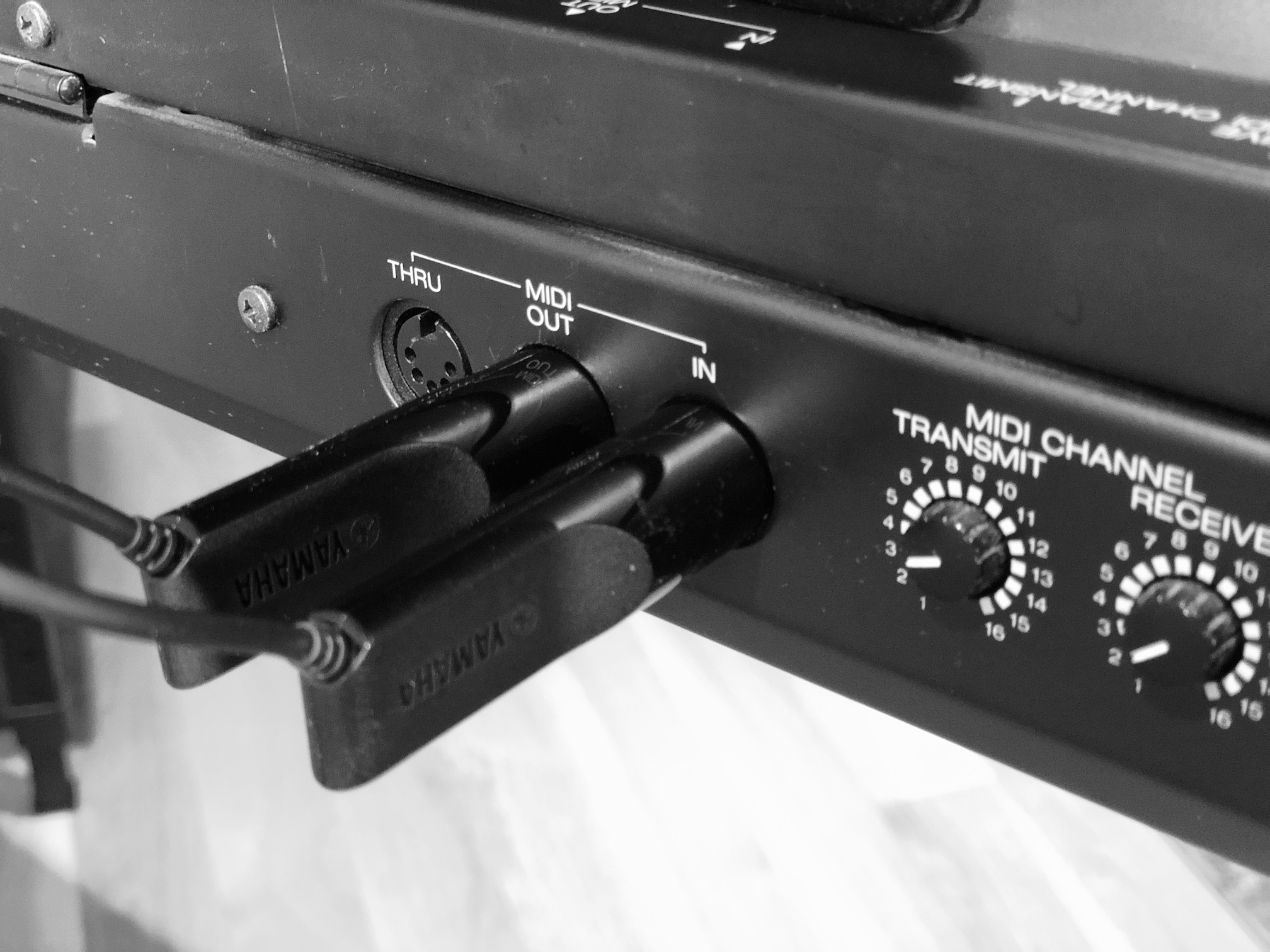 The MD-BT01 has a very smart appearance – it consists of just two large plugs connected by a single wire.  It runs off of the current already provided by the 5-pin MIDI signal.  Just plug it in, and it advertises itself as a Bluetooth MIDI connection point.    Since it uses the Bluetooth MIDI standard, it can connect to many different devices.  We tested it with Raspberry Pi and it works fine with Raspbian Stretch.  If you have followed the steps in our previous article (https://mclarenlabs.com/blog/2019/01/15/korg-microkey-air-37-bluetooth-midi-keyboard-with-raspberry-pi/) then your Pi is ready to go.

If you have a MIDI keyboard with 5-Pin DIN connectors, you’re probably familiar with a little area on the back of your keyboard that looks like the figure below.  These connectors were specified as part of the original MIDI standard.  Most of today’s MIDI keyboards use a single USB connection to carry both “input” and “output” data.  The 5-Pin MIDI standard transmits data in a single direction over a single port.  The “In” port is for input data, and the “Out” port is for output data.  The “Thru” port transmits a copy of the input data. 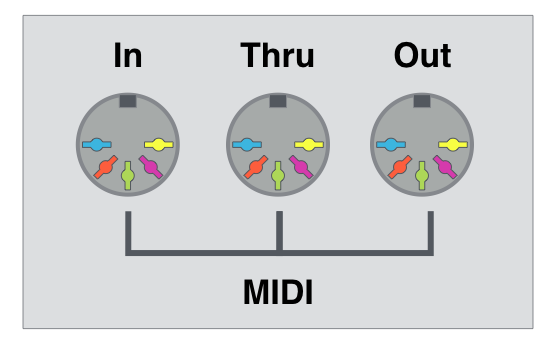 The Yamaha MD-BT01  plugs into the “In” and “Out” ports of a MIDI keyboard, controller or instrument.  One very nice thing about the adapter is that it gets its operating power directly from the keyboard or instrument it is plugged into.

Pairing with your Raspberry Pi 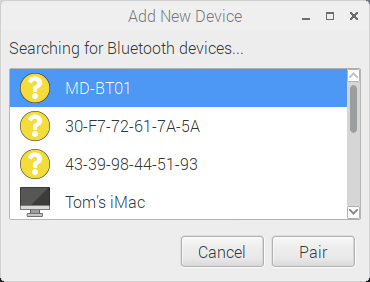 After a few seconds, the pairing process should be complete.  If you have succeeded you will see a dialog box like the one below.  Press the [OK] button.

If you don’t see this confirmation, review the instructions in our previous article.

Verify that the Adapter is Connected

Make sure that the keyboard is now part of the MIDI system of the Raspberry Pi.  One easy way to do this is to list the MIDI devices of your system using the aconnect command as shown in the figure below.  You can see that it is added as client number 128 in our system. 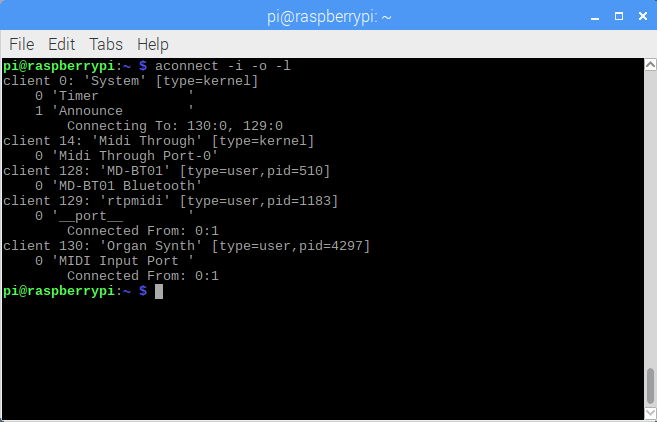 In our lab, we compared an old MIDI keyboard connected to the Raspberry Pi with the MD-BT01 to a new Bluetooth MIDI Keyboard – the Korg microKey Air 37.  The microKey Air feels more responsive than our legacy keyboard connected through the MD-BT01.  This test reveals that the Bluetooth connection method can be responsive!  But we are not sure whether the sluggishness of the legacy keyboard  is due to the keyboard itself, or the bluetooth adapter.
We will post more information if we perform more tests.

The Yamaha MD-BT01 makes it simple to connect MIDI keyboards with 5-pin DIN connectors to your computer.  We tested it with a Raspberry Pi 3B+ and found that it was simple to pair and use.  The MD-BT01 is well worth its modest price and a nice addition to our toolbox of connectors and adapters.