Do you want to have even more fun with your musical Raspberry Pi? Use an external Bluetooth MIDI keyboard with it! For this project, you need to download and compile a new version of the Bluetooth drivers for Linux. If you don’t already have compilation tools installed, you’ll need those too.

We will tell you how to compile and install the necessary Bluetooth driver, and then describe how to pair a Bluetooth MIDI Keyboard.

You should have a Raspberry Pi 3 with built-in Bluetooth adaptor and Raspbian Stretch OS.

The information in this section has been reproduced from the article listed in the References section,  with the important difference that –enable-midi has been selected.  A special thanks to Max who shared how to compile and install BlueZ..
1. Check Current BlueZ Version.
1-1. Before starting, let’s check the current BlueZ version.

You should see version 5.43.
2. Install Dependencies
2-1. Update the package list.

3-3. Configure.
Here is where our instructions differ from Max: We need to enable MIDI! Notice the “–enable-midi” flag.

4. Verify Update
4-1. Verify the BlueZ version by issuing the command below.

At this point, your system has BlueZ 5.48 up and running, with experimental features and MIDI ready to go. Let’s pair a Bluetooth MIDI device now.

First, turn on the Korg Microkey Air 37 keyboard. You should make sure you do not have the USB cable plugged into it.   To indicate that is in Bluetooth pairing mode, the indicator light will be flashing blue.

Use the Bluetooth panel widget in the top-right of the Raspberry Pi Desktop to add a new bluetooth device. 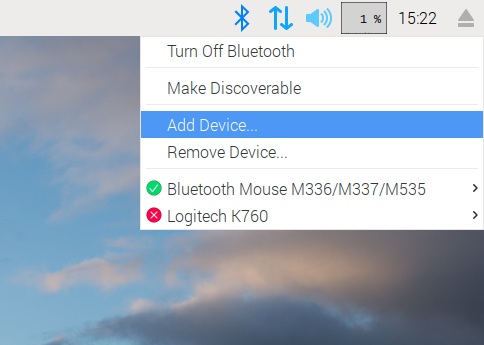 You’ll see a list of Bluetooth devices available for pairing. The Microkey Air should appear in the list.  Select it and press [Pair].  (Note: the gray bar in the photo is what you see when you hover over the Microkey Item – the string “8C:45:00:E7:A5:16” is the Bluetooth MAC address of the device.) 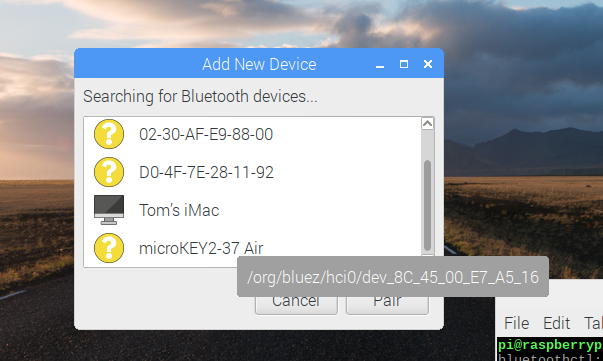 At this point, it’s likely that you will see that Authentication with the device has FAILED! This means that pairing was not successful. We’re going to fix this in the next step.

The Microkey Air needs a different mode of authentication. To set this mode we’re going to use the “hciconfig” command.
Use the command to set the bit to “0” (disabled).

We’ve included a screenshot from our terminal showing how we used the command.   In the first command we query the current state of the “sspmode” (Simple Pairing Mode) bit and see that it is enabled.   Then we use the hciconfig command to turn it off.  The last line of the terminal screenshot shows us querying the new value of the bit and that it is now “disabled.” 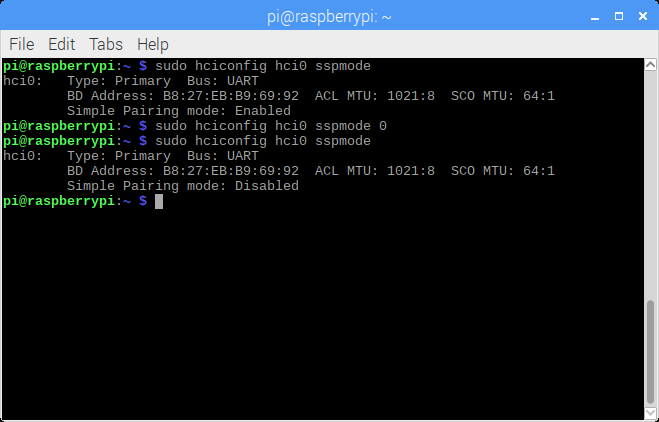 When pairing is successful, you will see the alert below.  Pairing has completed successfully, but it may sound as if the device is not usable.  The alert is due to the the LXPanel Bluetooth widget which only knows about HID and AUDIO devices. It does not know what a MIDI device is, so it reports the message shown.
Next, we want to verify that the added Microkey Air is available for MIDI.

Confirm that the MIDI Device is Functional

You can use the aconnect command in a terminal to see the state of the MIDI system. If this all went well, the Microkey Air 37 will now be part of your MIDI system.  It can be used with any Raspberry Pi MIDI program … especially McLaren Labs Pi-Organ-Synth! 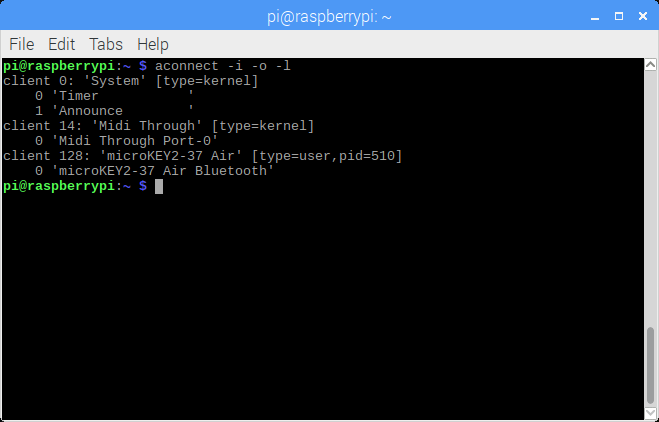 For more information about the aconnect command, read our earlier post here: /blog/2018/07/03/linux-midi-cheatsheet/

This article gave all of the steps showing how to install BlueZ 5.48 on Raspberry Pi.
https://scribles.net/updating-bluez-on-raspberry-pi-5-43-to-5-48/
The initial checkin for MIDI in BlueZ gave instructions on how to compile the driver with MIDI.
https://git.kernel.org/pub/scm/bluetooth/bluez.git/commit/?id=5b8353e90e5bffd22e4c2cbc354b7c638c6bebd0
Read about the Microkey Air 37 here.
https://www.sweetwater.com/store/detail/microKAIR37–korg-microkey-air-37-bluetooth-keyboard-controller